What Did Eva Eat? or How To Control Carpenter Bees

Every year we have to contend with carpenter bees outside our house and our garage. I tried using sprays and they didn't work. I'm trying to be more "green" now, but that's not the true reason I stopped spraying. But officially, that's why. The true reason is that the sprays didn't work. If they did work, I didn't see an immediate kill.

I started using a tennis racket to kill them. It is fairly effective because the open lattice avoids an air thrust that would alert the prey. It is best to take a swing right at the face as it moves forward. The "thwack" sound is satisfying and it lands nearby. You have to smash it into the ground repeatedly to finish the job. Also, don't let your kids lick the racket later on, especially if you use the spray to slow the bees down for the swing.
This past weekend, when I was bragging to my husband about my good stats, and had the bugs lined up in a row on the porch to count cou, he acted like, "there she goes again. At least she has some mishegas so she's not nagging me." He didn't say it, but I could tell.

I looked it up the on the internet and found a lot of references to "bee tennis." I pointed out to my husband that it is an accepted method that even several agricultural extension people say helps keep down the carpenter bee population. He said he didn't know what an agricultural extension even was. I said, "You know, like the guy on Green Acres that gave Oliver advice about the farm?" He remembered him and then I started wondering about that guy and looked him up. It was Hank Kimball.

Then I started looking up other important facts about Green Acres and found out Eva Gabor died of respiratory failure as a result of food poisoning. It is ironic because her character on the show was known to be a bad cook. In fact, when I have car trouble I often think about the episode where her pancake cutouts were used to fix the truck.

Everywhere I looked on the internet, it said the same thing about respiratory failure from food poisoning. I would really like to know what she ate that killed her. I want to avoid eating whatever it was. If anyone knows, please let me know. I will warn everyone.
Posted by nancy dunlap at 8:12 AM 1 comment:

Christmas With The Dunlaps 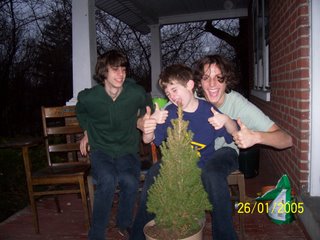 Traditionally, we eat the Christmas Tree after New Years Eve.
Posted by nancy dunlap at 4:29 PM No comments: 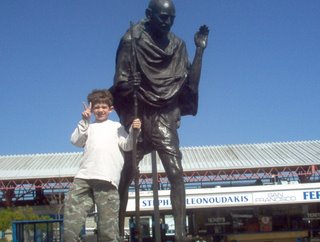 Spring Break in San Francisco
Don't Go!
I went to San Francisco for Spring Break. It is the worst beach in Mexico.
I did find an statue of Stephan Leonoudakis though.
Posted by nancy dunlap at 10:58 AM No comments: