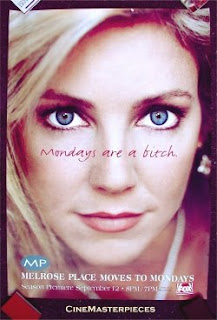 I don’t consider Melrose Place to be a soap opera. It was Fictional Documentary exploring the culture and architecture of a post-90210 Los Angeles society as well as a morality tale. It also takes a page from Armistead Maupin’s Tales of the City, but more heterosexual.
Kimberly is every bit as real as Heather Locklear’s character, Amanda. It was interesting that Kimberly lived in the Beach House where you would expect to find someone of Heather’s social status. But the Beach House was without character and charm, befitting Kimberly. Heather was nuanced. There were many sides to her and she could take your breath away when she needed to. The Melrose Place enclave was perfect for Locklear. It was small and lovely, like her, yet much was brewing inside the doors.
It is notable that when the doctor split from Jane and went from being a good guy to being a cad, he moved into the Beach House. The Melrose Place apartments represent a modern day Garden of Eden from which Dr. Mancini was expelled. When the prostitute with the heart of gold went bad, she moved into the Beach House. The Beach House doesn’t necessarily represent hell, but it is interesting that although Kimmie blew the place up, it rose again and flourished. Good triumphed over evil.
There are other biblical references, such as evil Reed and evil Brooke both getting the ultimate baptism. How about Daphne sacrificing her child? I’m not sure if this refers to King Solomon or Abraham. That should be the next trivia question.
Posted by nancy dunlap at 8:10 AM No comments: Links to this post